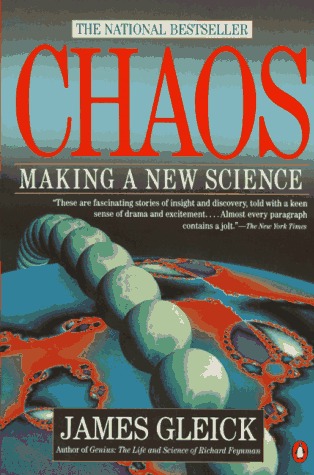 Uau, este livro foi épico! O caos pode ser um conceito complicado, mas o autor James Gleick escreve de uma maneira muito eficaz; transmitir idéias complicadas de maneira fácil de entender.
Eu posso apenas imaginar o quão difícil este livro teria sido seguir, se ele foi atormentado pelas longas e secas escrituras que caem sobre muitos livros de ciências ... Felizmente, isso não acontece. O autor relaciona idéias conceitualmente complicadas em um estilo facilmente acessível.
Gleick transmite a importância de Caos desde cedo:
"The most passionate advocates of the new science go so far as to say that twentieth-century science will be remembered for just three things: relativity, quantum mechanics, and chaos. Chaos, they contend, has become the century’s third great revolution in the physical sciences. Like the first two revolutions, chaos cuts away at the tenets of Newton’s physics. As one physicist put it:
“Relativity eliminated the Newtonian illusion of absolute space and time; quantum theory eliminated the Newtonian dream of a controllable measurement process; and chaos eliminates the Laplacian fantasy of deterministic predictability.” Of the three, the revolution in chaos applies to the universe we see and touch, to objects at human scale. Everyday experience and real pictures of the world have become legitimate targets for inquiry.
There has long been a feeling, not always expressed openly, that theoretical physics has strayed far from human intuition about the world. Whether this will prove to be fruitful heresy or just plain heresy, no one knows. But some of those who thought physics might be working its way into a corner now look to chaos as a way out"
A teoria do caos tem sido fundamental na modelagem. Antes da teoria do caos, os engenheiros eram incapazes de modelar coisas como atrito e turbulência, usando a teoria da perturbação.
Gleick fala longamente sobre a fundação da teoria do caos e do efeito borboleta, pelo meteorologista Edward Lorenz.
"One day in the winter of 1961, wanting to examine one sequence at greater length, Lorenz took a shortcut. Instead of starting the whole run over, he started midway through. To give the machine its initial conditions, he typed the numbers straight from the earlier printout. Then he walked down the hall to get away from the noise and drink a cup of coffee. When he returned an hour later, he saw something unexpected, something that planted a seed for a new science.
THIS NEW RUN should have exactly duplicated the old. Lorenz had copied the numbers into the machine himself. The program had not changed. Yet as he stared at the new printout, Lorenz saw his weather diverging so rapidly from the pattern of the last run that, within just a few months, all resemblance had disappeared. He looked at one set of numbers, then back at the other. He might as well have chosen two random weathers out of a hat.
His first thought was that another vacuum tube had gone bad. Suddenly he realized the truth. There had been no malfunction. The problem lay in the numbers he had typed. In the computer’s memory, six decimal places were stored: .506127. On the printout, to save space, just three appeared: .506. Lorenz had entered the shorter, rounded-off numbers, assuming that the difference—one part in a thousand—was inconsequential.
It was a reasonable assumption. If a weather satellite can read ocean surface temperature to within one part in a thousand, its operators consider themselves lucky. Lorenz’s Royal McBee was implementing the classical program. It used a purely deterministic system of equations. Given a particular starting point, the weather would unfold exactly the same way each time.
Given a slightly different starting point, the weather should unfold in a slightly different way. A small numerical error was like a small puff of wind—surely the small puffs faded or canceled each other out before they could change important, large-scale features of the weather. Yet in Lorenz’s particular system of equations, small errors proved catastrophic."
Gleick continua explicando os fractais e fala longamente sobre o The Mandelbrot Set:
"The Mandelbrot Set is the most complex object in mathematics, its admirers like to say. An eternity would not be enough time to see it all, its disks studded with prickly thorns, its spirals and filaments curling outward and around, bearing bulbous molecules that hang, infinitely variegated, like grapes on God’s personal vine. Examined in color through the adjustable window of a computer screen, the Mandelbrot set seems more fractal than fractals, so rich is its complication across scales. A cataloguing of the different images within it or a numerical description of the set’s outline would require an infinity of information. But here is a paradox: to send a full description of the set over a transmission line requires just a few dozen characters of code."
O conjunto de Mandelbrot: 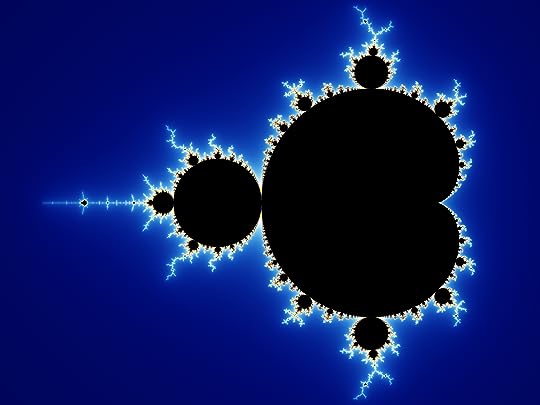